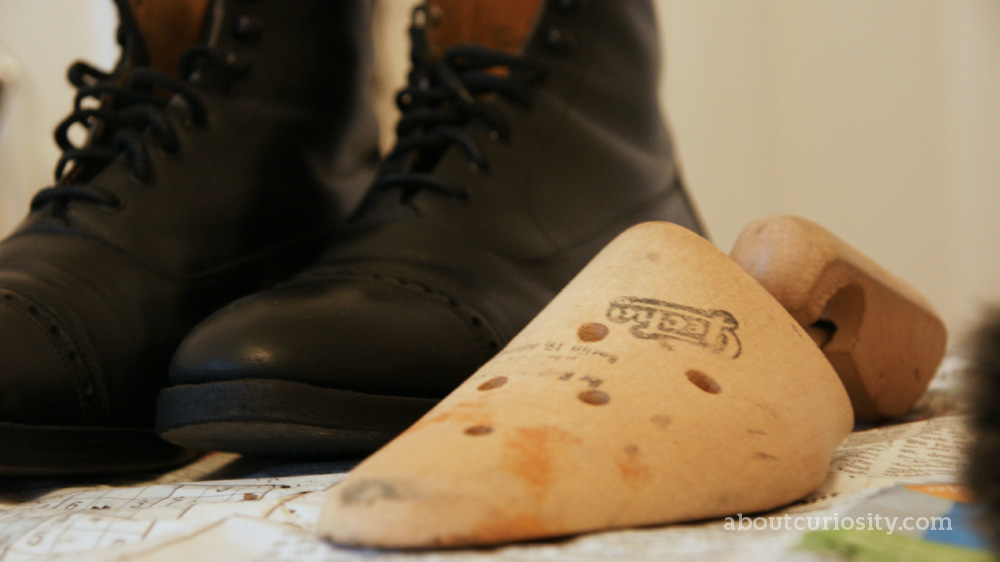 my grandma used to say “if you try to safe money in the first place, you’ll end up spending the double in the end”. and it is ridiculous how often i still make the same mistake. you know how it is, you need something, especially the things which have a mainly practically use and you think: oh, no one will see it, i don’t have to buy the expensive one… and than it turns out, that there is a reason for that it was cheaper. either in the use (have you ever had a cheese grater which hurt your hand because of the cheap handle), or because it was produced under bad circumstances, or the guarantee, or they didn’t last as long as the more expensive one. and i am NOT saying expensive is always better as you will see later. but many, many times i should have spent more money and would have got more for it.

ages ago when i started working with wordpress, i bought a book about wordpress. i found a really good one (WordPress: The Missing Manual (Missing Manuals)

) for about €29.90 I know not that much, but i thought, i need just a bit of information and didn’t want to spent that much, ended up buying a cheaper book for 9.90 and … had to buy the other one as well later than. even if you are really bad in maths that is 9.90 more than i would have paid in the beginning.

But than this blogpost was inspired by an article i read in the financial times from 18/19 of may 2013. doesn’t that sound cool? me reading the finacial times? I wonder if they try to make the paper more feminine choosing the pink paper or if they chose the colour because of that trend of pink shirts in the financial and advertising branche?

anyways, back to the story . the article was written by tyler brûlé. yes a man with a name like a desert, and he looks very good as well and on top he is the editor-in-chief of one of my favorite magazines the monocle magazine. read the full article here or click on the picture below.

but before i fainted by being impressed, i read:

perhaps there was a reason that they (a pair of pants) were only €20?

a cheap garment?, ok! may be he only wears 5 pair of under pants at all? Or his pants have a very long life duration? €20 for one pair of pants. i asked my friends (male) how much they pay for their pants and most of them buy these 3 for 14.99 packages. a few of the gay ones have half of these cheap ones and than some very expensive ones. Why did the straight guys don’t answer that?

It is not that i think €20 is too much for a good quality pant. It just made me think about the bad circle we are in. to buy the “good” things that last longer and help you saving money and the world you have to pay more and not soo many people can afford that.

But i agree with mr. brûlé, besides from seeing the difficulties.

I have a pair of shoes which i have now for 23 years! yes, do you know many people they have shoes that long? and wearing them? they are in absolut great condition, were never really out of fashion, they are a pair of church’s men shoes. My boyfriend at that time bought them for me and i had to buy them from him for one deutsch mark. because it’s said it brings bad luck to buy shoes for your girlfriend (she runs away) is what they say.

today was shoe cleaning day, so here they are. still pretty and shiny! love them. this one are the original church ones, when they were still made in england. now they are made in italy and bought by who ever. might be a difference. i have a pair of jil sander shoes, which might be the same price and they are very good quality as well, but they would never last as long as my church ones. and when the got broken and i went to the shoe maker, the woman said “not worth doing them, they won’t last much longer, good leather but bad making!” so much about what i said earlier, more expensive doesn’t mean always better quality, sometimes you pay only for the marketing not for a real value.

What do you think? What could people do who can’t afford better quality things from fair trade or organic etc.? 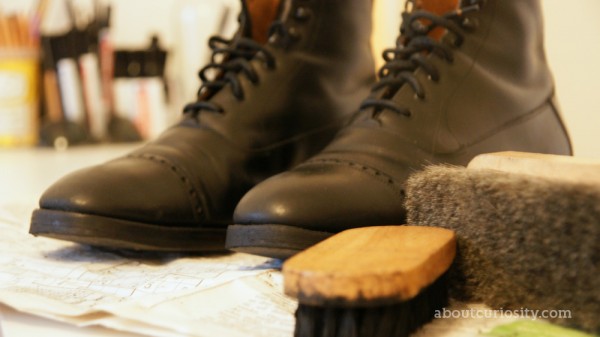 no idea what that says, but it is handwritten in my shoes 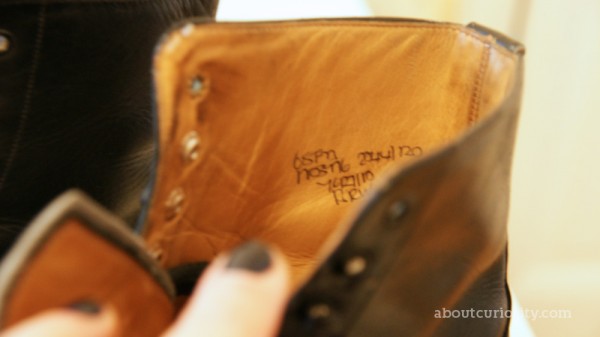 i learnt from my friend alexander how to take care about shoes, like always to use a shoe tree (best are from ceder wood) and good shoe cream, only used with brushes and soft fabric, newspaper in when wet, shoecream with a bit of vinegar when they get these snow lines…. 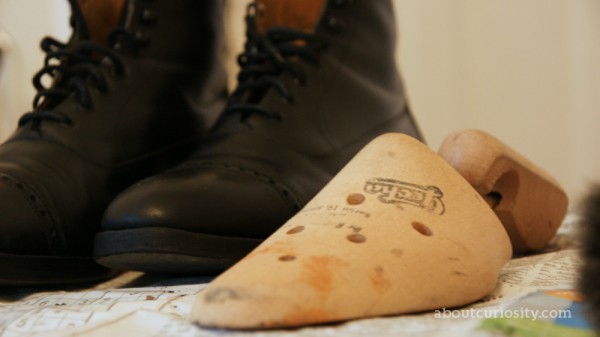 they just got a new pair of laces 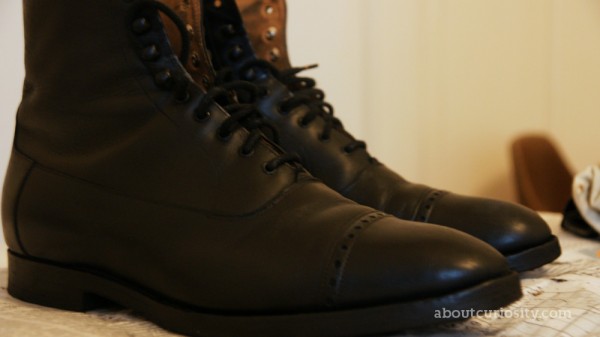